Jaimi gave me hope. Something I had lost

Of all the things I had to inherit from my father, bad veins had to be the worst thing he could have given me. I certainly was hoping for some secret stock or bonds that no one knew about that matured when I reached the age of 21 or maybe 35. Or maybe a nice lake house on Lake Lanier with a boat dock and boat.  Never in my wildest imagination was I prepared when I was told at the ripe old age of 30 that I would always have a problem with blood flow.

Of course at that time, I didn’t think I would ever have the problems I have now and be requiring an IV all the time either. So a big shout-out to Dad, Thanks, first and foremost.

It seems tiny veins run in our family. My aunt Christine, dads sister, bless her heart (we say that a LOT in the south) had a horrible time getting “stuck” and also my cousins on that side of the family as I found out later too suffered with the same condition. I have wondered many times if this is related to or has amplified our auto-immune disorders.
Both my brother and grandmother who passed away with cancer also suffered with little veins. Finding a vein is only one of the problems. Once the IV is in place, depending on the drug you are getting, our veins are subject to “blow” which is very painful and means the process has to start all over again. I have actually had to have icepacks on my IV while the drug was being infused because my veins simply were too small and it burned as it went in no matter how slow it was calculated to go. You might say there’s a lot to behind the scenes of being an MS patient that a lot of people do not know or understand so hopefully after reading this and other articles everyone will see what we have been saying for the past 15 years! 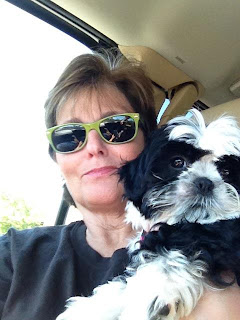 I was first told to go to the infusion center at our local hospital for the first of many infusions back in 2004. I didn’t know what to expect or how they would make me feel, if I’d get sick, etc. Back then I was working and I was trying to fit in all in, you know, be productive, make everyone happy. My employer “said” they were supportive but that’s a different story for another day. I was getting IVSM and it gave me a migraine and nausea from hell. I had to drive myself because I had no one else. Again, that’s another story for another day. Isn’t it amazing how when you get diagnosed with a scary life threatening illness all your friends and family kind of disappear? So, getting back to the nausea, they gave me Zofran for the first time in the IV and it was great! It helped me immediately. Other than my veins blowing a couple of times and having to keep ice packs on my arm it went great. My visits there were short lived though. I couldn’t continue to drive myself then go back to work as if nothing happened so I went to Plan B. We discussed home health care with the doctors and I qualified and it worked out great. I arranged it for the weekends or after working hours. This MS thing was a pain and was consuming 60% of my life for sure. I was taking shots everyday myself, then having home health care take care of the stuff I couldn’t manage. But I was dealing. It was what it was. And I tried not to get depressed. I really tried.

I remember when I met Jaimi. She came in from the agency, a gorgeous smile and with the most positive attitude I had ever seen! I believe God puts people in your life when you need them and for a reason and boy did I need Jaimi! I had lost my job, and was about as down as any one person could get. She was a ray of sunshine although I’m not sure she realizes just how much she helped me and my family. The day we met, was ordinary except I had pretty much reached the end of my rope. My career of 35 years had ended because of a seizure I had had at work and employers who were looking for a reason to get rid of me. That gave them one. I felt like a burden to my family, I had lost ALL my friends or so called friends,  had no income, (NO INCOME) and was dealing with this stupid disease that no one could see, no one believed was real, and no one understood…except Jaimi. What she doesn’t know is that day, the day we met, I had already written good-bye letters to all my family explaining why I felt like I didn’t need to be here anymore. I said I was so sorry for letting everyone down, especially my husband who I had just married 6 months earlier. He sure got a raw deal. I adored him but felt like he and the rest of the family would be better off without me. I didn’t want to end up in a wheelchair or God forbid make someone have to wait on me. I had been so independent all my life.  I was a single mom. I raised two of the most wonderful successful children right by myself. How in the world was it fair to ask them to look after me?? Couldn’t do it. But in popped Jaimi. A NP student at Georgia Southern, just full of piss and vinegar and life and love everything I wanted but lacked. She snapped me out of it that day, somehow someway and the next, and the next, and I began to look forward to her visits!! I asked only for her. No one else from the agency could come. If she wasn’t available, then I would rearrange my schedule to fit hers. I even cancelled Dr. Appointments to see Jaimi. Her talks meant more to me than she will ever know. She is about the same age as my daughter and as a matter of fact, my husband went to school with her mom! We are connected, not by blood but we are family for sure.

True story. During one of our scheduled visits, I had an IV that she had finally got in and got positioned where it didn’t hurt. That morning, Jaimi had class and asked if it was OK if “Jennifer” could come get the infusion started and she would be here shortly after. I said “sure as long as you’re coming.” She said of course and repeatedly told (Jennifer) not to take out the IV because “you’d never get it back in” plus it was very painful, etc. The first thing Jennifer did upon arrival was take out the IV. Big mistake. I tried to tell her. Then she tried re-sticking me. I’m usually a good sport because I've been pricked and prodded so many times. Once she got a vein but it blew and blood went everywhere and the poor girl was more worried about my rug and my clothes than making the blood stop. I was hysterical but not in a funny way. I told her, never mind about the floor, and just don’t let me bleed to death! She ended up sticking me a total of 11 times I think it was, I kind of lost count or maybe I passed out, LOL, and then when she finally realized we had a problem, she started looking at my neck veins and my feet veins. I knew THAT wasn’t going to happen. So I said, “Not today, call Jaimi” but about that time Jaimi came in. Man, was she mad! We sent Jennifer on her way and by the grace of God got the IV restarted. That was my last IV ever that day. I was sent two days later to the hospital for a port-a-cath surgically implanted and that was the best thing I've ever had done. If anyone asks me about having one implanted, what the risks, etc…I say DO IT!! It’s been a lifesaver for me and my tiny veins! I’m able to receive all meds including all infusions, pain meds, etc thru my port and also mine is the type that is called a Super Port which means all blood can be drawn thru it also. Again, it has been the best thing since my MS diagnosis down this lonely road to hell.

I have been blessed to have met Jaimi and been able to stay in touch with her all throughout my journey. She doesn’t work for the home healthcare agency I use anymore, and has since graduated and works as a NP at a local emergency room. I am able to see her on a regular basis to get my port flushed and for other minor illnesses such as migraines, colds, UTI’s, and other problems all us MS’rs face. We became lifelong friends during a very difficult time in my life and I will be forever grateful for her caring, gentle, kind, and compassionate ways. She showed me MS could be dealt with both from a physical and mental standpoint, but most importantly, she gave me hope. Something I had lost for sure. Now I pray I can pay-it forward…..

Posted by MSnewsChanel.com.com at 2:02 PM